"...After We had requested this audience with you (the Archbishop of Canterbury)" I said, "We heard that the Pope of Rome had declared [the war's] legitimacy and recognized the Italian occupation of Ethiopia. This has been reported by the press."
(Emperor Haile Selassie First)

While the church was progressing, Mussolini, who had proclaimed a great colonial power in Africa along with his fellow dictator, Hitler, invaded Ethiopia. The tragedy that took place under Mussolini’s Fascist regime has left unspeakable scars upon the people and church of Ethiopia, where the Roman church made another attempt of proselytism.

It was similar to the problem of the sixteenth and seventeenth centuries. “...Mussolini declared that for fascism empire-building, or the expansion of nations, was a manifestation of vitality and proclaimed in metaphysical vein, that the Empire in fascist doctrine was not only a territorial military, but also a spiritual and moral expression.”

In keeping with his plan he laid down great damage on the people and the church. At this particular time all Ethiopian citizens shared martyrdom regardless of the differences of religion, race, or creed.

As is it common with every political corruption to divide a nation as a method of winning or weakening it, the Italians attempted, by costly and malicious propaganda during the war to set the Muhammadans against the Christians. At first the Muhammadans themselves supported the idea. Later on a national spirit was awakened instead. Since the Italians were not only persecutors but also political and economic oppressors, the Muhammadans fought the invaders united with their Ethiopian brothers.

During the attempt on the life of General Graziani in February 1937 and on several other occasions, thousands of Ethiopians were murdered, including bishops’ priests and Moslem sheiks.

The Italians concentrated on exterminating the Christian people and destroying sacred places. In particular, the Italians wanted to exterminate the clergy, who were considered the backbone of the people’s struggle against the aggressors.

An Ethiopian Moslem wrote an account of the wholesale massacre he witnessed of Christian Ethiopians by Christian Italians. “…I stood and thanked God that he had not made me a Christian. Yet I knew that the sin did not lie with Christ. One Sunday, I saw some white Italian soldiers enter an Ethiopian church and rang the bells, sixteen old men thought it was time for prayer; before they could enter the church the Italians killed them. I heard the words of these poor old men Egziabeher yasaywo (may God open your eyes to the truth) I could not help crying, but the Italians laughing, the dead bodies lay for two days on the steps of the church.”

He further stated that he saw “...an old man sitting in his house, his Bible in one hand and a white flag in the other. Italian soldiers entered the house and demanded the old man’s money. He answered that he was poor, but offered them all he had three dollars ($3.00). They fired three bullets at him and he crumpled up dead.”

The Italians had several methods of murdering the people, some of which involved the Ethiopian people’s attachment to the church. It is customary in Ethiopia to celebrate matin at night. At this hour all church bells are rung to summon the faithful to worship. Having knowledge of this the fascists did not hesitate to satisfy their violent act. They rang the bells. Then when the people came in their thousands they found that these bells had not summoned them to worship but to the most painful death that the civilized world has ever witnessed. Bishops and priests were killed slowly their limbs removed one at a time while their murderers watched with glee as they suffered. Clergy and civilians were victims of beheading accompanied by the smiling faces of their executioners. Two of these victims were Bishop Petros and Bishop Mikael. Bishop Petros was asked to sign an act of submission to the Italian authorities and to pronounce excommunication of the Ethiopians who would not submit to the invader, but he refused to comply. Instead he declared that the land of Ethiopia and the people should never accept the Italian aggressors. As a result he was gunned down. Over Two thousand churches were razed to the ground and numerous transcripts were stolen. 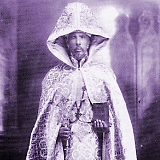 With his last Breath, Abuna Petros said, "Behold the land of Ethiopia; be cursed if you accept the enemy." This immortal saying shall be instructive until the Day of Rapture. (His Imperial Majesty) 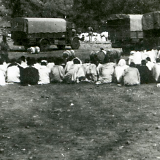 As statistics compiled by expatriates and our own people showed, by the end of the war in Ethiopia, on our side alone, 750,000 people had been killed, 500,000 houses and other properties burned down, 2,000 churches ransacked or ruined, about 14 million cattle devoured and 75% of the educated young men killed in cold blood. The war damage could not be less than the statistics revealed. It is probable that it was far more than alleged.` (His Imperial Majesty) 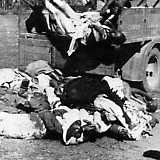 We continued the march the next day, Miazia 23 [May 1], and entered Fiche. From there, We went to the church at Debre Libanos and expressed to Our Creator Our heartfelt gratitude and immediately recieved Our soldiers and a few clergy. The monastery of Debre Libanos had been burned down by the facists, the clergy exterminated at the hands of the enemy, it's treasures looted, and the entire vicinity abandoned and neglected. When we saw all this, we were extremely saddened and deeply moved. (His Imperial Majesty)

"...We would like to express to Your Majesty that our agony was reduced and hope uplifted when we learned about Your Majesty's appearance before the League of Nations holding the scepter of Solomon in your hands, to reveal that your defenceless people had been exposed to an unprecedented repression and wanton brutality unleashed by the Italians, and also, to seek justice as well as assistance for your people so as to extinguish the fire that has engulfed us. Woe unto those countries who do not give just judgement to the Emperor of Ethiopia, who in honour of and in loyalty to his duty, stood before them in quest of Justice, because they are the ones who take on themselves the responsibility of invoking the wrath of God...."
Meskerem 21, 1931 [Oct 1, 1938] - Dejazmatch Mengesha Wossenie: Ras Abebe Aregai: Fitawrari Zewde Aba Koran