The Kebra Negast states that when Menelik I visited his father King Solomon in Jerusalem, Menelik expressed to his father the desire to take to his country the Ark of the Covenant, which is the Tables of the Law that God had given to Moses and that had journeyed through the ages with the children of Israel until they aquired kings to rule over them.

The worship of the True God was officially introduced during the reign of Makeda. It was during her reign the Solomonic Dynasty was established in Ethiopia and Ethiopia became the true spiritual Kingdom of Israel in 1000 B.C.

This was an additional blessing to the already blessed Fatherland of Ethiopia. In the northern part of Ethiopia, a thousand years before Christ, Makeda, the young virgin queen, lived in the Virgin Land (Ethiopia). The capital of her kingdom was Axum. A very powerful queen, she reigned over parts of Southern Arabia in Sabaea (Sheba/Yemen) and because of this was titled Queen of Axum and Sheba. Born in Tigre Province, the daughter of very wealthy parents, who were descended from a very powerful race, Makeda had the privilege of an education. She was trained in and acquired a formidable knowledge of natural history, music and astronomy. Her knowledge of the world was vast. One of her most famous achievements was her difficult journey to the land of Israel in search of wisdom and righteousness proving the Wisdom of Solomon.

A peculiar woman, she had all her life been interested in questioning the mysteries of life and was versed in the rituals of the Temple. “ When she heard of the fame of Solomon concerning the name of the Lord, she came to prove him with hard questions” (1 Kings 10:1).
(The Ethiopian Tewahedo Church, Yesehaq, p.4)

During Makeda’s reign Ethiopia was famous for her vast export/import trade with nations throughout the known world. Ethiopia’s chief exports were gold and silver, which were handled by Ethiopian merchants particularly in the Kingdom of Axum. One the best known merchants was Tamrin, a man of high qualifications who handled the queen's transactions. Tamrin was extremely wealthy. He possesed 520 camels and 73 ships and traffiked for the Queen by sea and land and in India.

At that time King Solomon of Jerusalem was building the Temple of God and his navy was navigating the Red Sea coast in search of gold in Ophir and wood for the pillars of the Temple and for his own palace. Solomon heard about Tamrin and enlisted him along with other merchants, and Tamrin brought to Jerusalem gold, precious stones and blackwood from Ethiopia. Upon his return to Ethiopia Tamrin gave an account of what he saw to the queen. He reported how he saw the construction of the Temple of the Ark of the Covenant of God and that King Solomon was the “...richest King on earth, who ruled with the wisdom of a sage.” The queen, extremely amazed at Tamrin’s report about King Solomon, decided to take the long strenuous journey to Jerusalem to see King Solomon.
(The Ethiopian Tewahedo Church, Yesehaq, p.5)

The Queen Journeys into Wisdom and finds Light

The queen of Sheba, being a woman who was inquisitive of philosophy, and eager for wisdom, knowledge and understanding traveled more than one thousand miles to seek wisdom by inquiring in the King Solomon’s wisdom. Josephus notes the queen's thrist for knowledge: “...For I desire wisdom and my heart seeketh to find understanding…. I will seek after wisdom and she shall protect me forever….”. Her inquisitive nature, as noted by Josephus, is brought to light by her own words in her memoirs, (Personal, vol. 12): "... Perhaps many people will say I am inquisitive, but that is simply because they do not understand me. I am always anxious to learn and serious minded....". Her Journey to Jerusalem was a symbol of great faith and so Our Lord and Saviour Eyesus Kristos spoke of her to the generation that existed during His Time. That generation was described as “an evil and adulterous generation that seeketh after a sign” (Matt. 12:39). They were a generation that would not believe in God unless a sign was shown them. Being therefore angered by their unbelief, Our Lord said; “ The Queen of the South shall rise up in the judgment with this generation and shall condemn it; for she came from the uttermost parts of the earth to hear the wisdom of Solomon; and behold a greater than Solomon is here”.(Matt. 12:42)

So desperate was the queen's desire for wisdom and so great was her faith that before leaving for Jerusalem, she expressed what was in her heart concerning King Solomon, whose wisdom was to bring her closer to God. She said"...And I love him merely on hearing concerning him and without seeing him, and the whole story of him that hath been told me is to me as the desire of my heart, and like water to a thristy man". Such was her faith, upon learning the good news concerning the name of the Lord, the wisdom of Solomon, and the Land of Judah, for she journeyed with a very large train, with camels that bore much spice, gold and precious stones as gifts to the king of Israel.

Enroute to Israel, Queen Makeda made several stops, including one in Sheba, a part of her Kingdom. The Book Of Kebra Negast tells us that the queen and all who came with her were recieved with dignity and majesty. Her subjects the Sabeans greeted her and expressed their love with singing and great homage. It was a grand opportunity for the people to have seen their Monarch in person for the first time. The Queen, no doubt, was joyful at being with her people on this royal occasion. Then Makeda left for the land of Judah, which was about one hundred camel days from Sheba. 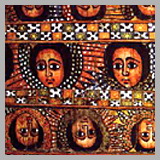 After a very sucessful journey, the queen and her people reached Jerusalem at the South Gate, where they were met by thousands who gathered to greet her, having heard of her coming throughout Judah. 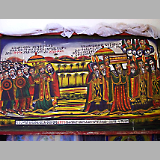 The Queen of Ethiopia, Makeda, was received by Azarias, the son of Zadok, the high priest, and by a large company of priest and noblemen. “...They wore robes broidered in gold and belts of gold about their loins, around their necks chains of gold and golden crowns on their heads.” 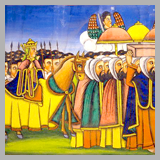 The conversion was her first step toward the wisdom she so desperately sought. She emphasized that she had absorbed wisdom and was encouraged by it. She described the teachings of King Solomon, which benefited her greatly: "...I went in through the door of the treasury of wisdom and I drew for myself the waters of understanding." She had seen a great light in the Knowledge of God and states“ …Through wisdom I have dived down into the great sea and have seized in the place of wisdom’s depth, a great pearl whereby I am rich. I went down like the great iron anchor whereby men anchor ships for the night on the high seas, and I received a lamp, which lighteth me, and I came up by the ropes of the boat of understanding. I went to sleep in the depths of the sea, and not being overwhelmed with the water I dreamed a dream. And it seemed to me that there was a star in my womb and I marveled thereat and I laid hold upon it, and it lighted me with the splendor thereof…”.

Thus began in Ethiopia the Solomonian dynasty of kings that lasted to the twentieth century. The Solomonic kingdom in Ethiopia should not be considered as the root of the Ethiopian kingdom but as an additional blessing from God, for the country had been ruled by kings for thousands of years before Menelik I came to the Throne. The removal of the Ark of the covenant was a truly historic event which is venerated greatly by Ethiopians. Today the Ark of the Covenant of God lies in the St.Mary of Zion Church in the sacred city of Axum, which is the birthplace of the Ethiopian Empire and center for Christian worship.