The development of arts and sciences, as we have been informed, came from Babylonia and elsewhere, but curiosity was aroused to go back over the historical facts of ancient times in which first degree is given to Africa. "..It is doubtless that industry, intelligence and justice were originated in Africa", but this historical fact was ignored by the average historian. (Abba Yesehaq)

This church was officially established on May 15, 1983, following a decision of the Holy Synod in Addis Ababa. The Church Building was consecrated and blessed by Abuna Elias, archbishop of the Ethiopian Orthodox Church in Djibouti. The church building in Cologne, Longerich (Lindweilerweg 94), built seventy years ago and named Lutherkapelle, belongs to the Evangelische Kirchengemeinde, Cologne-Gartenstadt and was kindly and helpfully transferred to the Orthodox Ethiopians.

The foundation of the Ethiopian Orthodox Church in Germany is being supported by the Tabor Society, instituted by Professor Friedrich Heyer and his students while they were in Ethiopia at Dabra Tabor, Constructing a school of the Orthodox Church.

The nature of the Ethiopian Orthodox Church and the richness of it's mental tradition is publicized in the German society through the activity of the Tabor Society, the publication of books and a magazine, and speeches in municipal centers.

A delegation of two men, Mr. A. Fox and Mr. N. Adams, came to Jamaica, West Indies, from England in 1972 in search of facts about the Rastafarian movement. When they found out that the Rastafarians in Jamaica were busy with the church, they went to His Eminence Abuna Yesehaq and expressed desire to become part of the church. They were gladly welcomed, and, after undergoing an intense period of instruction in the teaching of the Lord Christ, they were baptized and returned to London with church literature.

Upon their return to England they evangelized, spreading the the church's teaching in London and among members of the Emperor Yohannes Ethiopian World Federation (Local 33) in particular. After being invited by Federation Local 33, Abba Yesehaq went to England from New York on May 24,1974. There he studied the situation and the desires of the people more closely. Finally, hundreds were baptized and received communion upon completion of an intense period of instruction in the Faith.

Saint Mary Of Zion Ethiopian Orthodox Church was officially established. The Church was headed by Abba Areggawi Wolde Gabriel, a priest sent from the Mother Church in Ethiopia. He was assisted by four western born Deacons, who were trained by him for the Priesthood. The Ethiopian Orthodox Tewahedo Church is the Church of His Majesty Emperor Haile Selassie First

Having recieved the letter of Lebna Dengel, King Joam of Portugal declared: "...The way had been opened to the Powerful Christian King, Prester John, who with all his realms and people adored Jesus Christ, and who, by the reasoning and argument of King Manuel's ambassadors, had been induced to submit to the See of Saint Peter, Vicar of Jesus Christ on earth, to whom all Christian Princes owe homage". The King of Portugal and The Pope of Rome assumed that because Lebna Dengel wanted an alliance with Christians in the Middile East, he wanted to unite the Ethiopian Church with Rome. This was not so, Lebna Dengel being attached to his faith told them that he was not inferior to them in power or religion, for in his realms he was the pillar of faith, having need of no other succor than of God in whom he put his trust. His wish was not to change his religion, but to establish an alliance with a neighbouring Christian country, in order to protect the Red Sea, the coasts, and the islands therein.
...the Jesuits prepared “ a treatise on the Ethiopian errors and the infallibility of our holy faith”, they further issued a circular letter in which they advised Catholics and the Portuguese to have nothing to do with such “Schimatricks”; the letter also condemned Ethiopians as refractory and Obstinate against the Church. It urged Ethiopians to forsake their religion and rebel against their king. (Abba Yesehaq)

"...I, Haile Selassie First, Emperor of Ethiopia am here today to claim that Justice which is due to my people, and the assistance promised to it eight months ago, when 50 nations asserted that aggresion had been commited in violation of international treaties. I pray to Almighty God that He may spare nations the terrible sufferings that have just been inflicted on my people, and of which the chiefs who accompany me here have been the horrified witnesses.
It is my duty to inform the Goverments assembled in Geneva, responsibile as they are for the lives of millions of men, women and children, of the deadly peril which theatens them, by describing to them the fate which has been suffered by Ethiopia. .....And the Great Powers who have promised the gurantee of collective security to small States on whom weighs the threat that they may one day suffer the fate of Ethiopia, I ask what measures do you intend to take?"
(H.I.M Emperor Haile Selassie I: June, 1936)

Defender of the Faith

"Venerable and Holy Fathers, In listening to the profound spiritual message conveyed by your closing addresses, and appreciating the happy outcome of your sustained efforts, Our heart has been touched by profound gladness. It should therefore be clear to the whole world from the result of your work that Your Holiness has been guided and inspired by the Holy Spirit to accomplish your task in love and unity. The great common tasks accomplished by this Conference in unison bestow on the true faith and true order of the Oriental Orthodox Church the admiration of the whole world. As Solomon says, physical distance cannot be a barrier to love. Likewise, the distances among your respective countries have been abolished by the proximity of your hearts. You have thus been able to speak a single tongue and think with a single mind. We thank Almighty God for enabling us to witness the realization of Our dream in the successful outcome of this historic Conference...."
(H.I.M Emperor Haile Selassie First)
21/1/1965 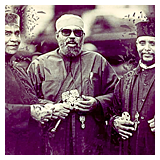 The Italians concentrated on exterminating the Christian people and destroying sacred places. In particular, the Italians wanted to exterminate the clergy, who were considered the backbone of the people’s struggle against the aggressors. 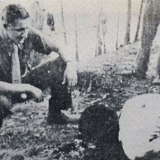 The tragedy that took place under Mussolini’s Fascist regime has left unspeakable scars upon the people and church of Ethiopia, where the Roman church made another attempt of proselytism. It was similar to the problem of the sixteenth and seventeenth centuries.