"..send me your embassies which I much desire from a brother. I do not wish for Ambassadors from the Moorish Kings, they do not hold me as a friend on account of the faith, but much profit accrues to them and they take away from my Kingdom much gold, of which they are great friends, and of me little; and if I omit to make war upon them, and to destroy them, it is in order not to destroy the holy house of Jerusalem, in which is the tomb of Eyesus Kristos, which God had left in the possesion of the vile Moors".
(Emperor Lebna Dengel)

In the years 1520 – 1527, during the reign of Emperor Lebna Dengel of Ethiopia, also known as Prester John in Europe, the Portuguese mission visited the country. Lebna Dengel was only twelve years old when he came to the throne. As he was a minor his grandmother whose name was Empress Eleni ruled the country.

At this time, the Turks occupied all seaports of the Red Sea, including Yemen and Aden. Eleni desired to fortify Ethiopia against the Turkish menace by an alliance with a neighboring Christian power. She appealed to the king of Portugal, who then had great possessions in India. Her ambassador, Mathew, was well received and as a result the Portuguese mission arrived in Ethiopia in 1520. Francisco Alvarez, who was the chaplain of the first Portugese mission to Ethiopia, wrote an account of that mission. He said he was greatly impressed by the agricultural wealth of the land, the vast herds of cattle, and the life of the people. Notwithstanding, his main interest centered in the churches and monasteries, their architecture and endowments, and the manner of performing services and the devotional life and austerity of the Ethiopian Clergy.

As Alvarez records, when the Portugese mission reached Ethiopia, numerous white tents were pitched on a great plain for the occasion. More than twenty thousand people were assembled in a semi-circle, and the mission was met by sixty messengers from the Emperor whom they met. They brought a letter and various gifts from their king and patriarch.

Notwithstanding Emperor Lebna Dengel was not pleased with the mission. The Portuguese delegation came with mainly politicians and churchmen including Ambassador Dom Rodrigo de Lima, Fransico Alvarez, and John Bermudez but none of military aid that the Emperor had hoped for. He asked them"...why they had not brought many muskets from the sea (meaning from Portugal)" They answered that "..they had not come for war," and "..on that account, we had not brought arms," said they. Their primary concern was to persuade Empress Eleni and Lebna Dengel to renounce their religion and become Catholic also to assist Portugal in the event that Portugal became involved in a war with Egypt. Lebna Dengel refused to renounce his religion but agreed to the proposal of military aid. He gave them land at Massowa with all “...the provisions and all that was necessary for this expedition.”
(Yesehaq, 47)

At this time, a conflict prompted by Moslems against Ethiopian Christians took place in Zeila, the port of Adal. Imam Mahfuzh ( the governor of Zeila) was the leader of this conflict who "adopted" a particularly succesful strategy for twenty-five years during every Lent, "...which was faithfully kept by all Ethiopian Christians".

The Ethiopians, being debilitated by the Lenten Fast, were in no state to withstand him. He pillaged crops and captured men and women for sale to Arab slave dealers. According to Alvarez's account, Mahfuzh "...carried off captive nineteen thousand Ethiopians and sent them all as an offering to the house of Mecca, and as presents to Moorish Kings". Churches were burned and clergies were persecuted. "...Having acertained the movement of Mahfuzh, the young Emperor set forth to meet him on the road" and ordered that all men should pray to God, and receive Holy Communion and make ready for the fight. Having heard this, Mahfuzh came out and asked if any of them would volunteer to fight with him. One of Lebna Dengel's men, Abba Gabre Endrias, accepted the challenge and in hand to hand combat with swords struck off Mahfuzh's head in the battle where he died, and "...victory was achieved over the moslem warrior, in the district of Adal". Lebna Dengel marched to the capital of Adal with no opposition. According to Sir Ernest Alfred Thompson Wallis Budge, having defeated Mahfuzh, Lebna Dengel "...flushed with his victories, did not seem to wish for an alliance with Portugal, though his country needed it sorely".

Ahmed Gran and the Turkish Invasion

About 1528 – 1540 A.D Ahmed Gran led the Turks in a terrible battle against the Ethiopian Christians. Ahmed Gran, an Ethiopian citizen but Moslem, was born in Harrar, to the South of Ethiopia, was the husband of Del Wambara, the daughter of Mahfuzh, who was killed by Lebna Dengel's Champion Abba Gabre Endrias. Assisted by all forces of Islam, he attacked the country from one end to the other and successfully opposed the Christians. For over a decade the invaders pillaged the land, innumerable monasteries and churches were sacked and burned to the ground. Ancient manuscripts and Other works of art were stolen. In the north the ancient church of Axum was razed to the ground and in the south the famous monastery of Debre Libanos was entirely demolished. Emperor Lebna Dengel sent John Bermudez who was still resident in Ethiopia to Portugal to ask assistance, and his request was granted. Meanwhile; Bermudez claimed to have been appointed Patriarch of Ethiopia by Pope Paul III, but the truth beyond it is that he was never appointed, although he spent many months in Rome trying to persuade the pope to appoint him patriarch of Ethiopia. Nevertheless, on his return, Bermudez converted some Ethiopian Christians to Roman Catholicism. He landed with a force of approximately four hundred soldiers at Massowa under command of Dom Christofore de Gama in 1541.

Lebna Dengel had passed away the year before on September 2, 1540 so his widow Sable Wongel and her son Galawedos who succeeded his father received the Portuguese. (1540 – 1549) The Ethiopians together with the Portuguese were victorious in all their battles against Gran. De Gama was killed by wounds received in battle in 1543 and shortly thereafter was avenged by a Portuguese who shot and killed Ahmed Gran. After a considerable period of time The Ethiopians and Portuguese were completely victorious.
(Yesehaq, 57)

Having recieved the letter of Lebna Dengel, King Joam of Portugal declared: "...The way had been opened to the Powerful Christian King, Prester John, who with all his realms and people adored Jesus Christ, and who, by the reasoning and argument of King Manuel's ambassadors, had been induced to submit to the See of Saint Peter, Vicar of Jesus Christ on earth, to whom all Christian Princes owe homage". The King of Portugal and The Pope of Rome assumed that because Lebna Dengel wanted an alliance with Christians in the Middile East, he wanted to unite the Ethiopian Church with Rome. This was not so, Lebna Dengel being attached to his faith told them that he was not inferior to them in power or religion, for in his realms he was the pillar of faith, having need of no other succor than of God in whom he put his trust. His wish was not to change his religion, but to establish an alliance with a neighbouring Christian country, in order to protect the Red Sea, the coasts, and the islands therein.
(Abba Yesehaq) 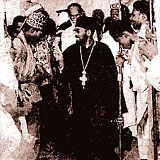 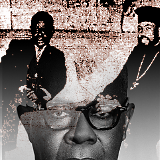 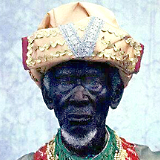