Apart from these, all of the European and Asian countries one after the other recognized Italy's occupation.
(His Imperial Majesty Emperor Haile Selassie First)

On Saturday, January 26, 1985 Brother Haile Mikael and Sister Esete Maryam were married. The event was well attended by family, friends as well as local media. His Eminence was interviewed on the radio again by a Jennifer Ryan who had just recently returned from a visit to Ethiopia.

On Sunday, January 27, 1985 a divine liturgical service was conducted with a large congregation in attendance. The first Scripture lesson was read by Father Clarke.
Hundreds of men women and children who had been receiving lessons from Kesis Tesfa Selassie (Donald Newman) of St. Kitts were baptized and confirmed and instructed in the teachings and doctrine of the church.

On Sunday evening a meeting was held with the newly baptized members and officers were elected to the Board Of Trustees and Brotherhood and Sisterhood Societies. The mission was named St. Gabriel. The Party left the next day for New York, after giving thanks to the Almighty for this wonderful opportunity to expound the teachings of Our Lord Eyesus Kristos.
(Yesehaq, 194)

The first parish in Los Angeles was established on February 27, 1973, through the invitation of an interested group led by Anthony Hamilton, to Abuna Yesehaq then Abba Laike Mandefro. Later Hamilton was baptized and ordained priest with several deacons. His new name was Amde Zion as a priest he was called Kesis. This church was dedicated to Saint Tekle Haimanot, the Ethiopian national saint and was located at 4305 Degnan Boulevard Los Angeles, CA 90008.

Kesis Amde Tsion
(Anthony Hamilton) was and is a visionary. As a member of the Watts Prophets, Kesis Amde Tsion saw a rainbow of hope at the end of a long tunnel of despair - the Watts Riot. From the ashes of the Watts Riot, he saw the Ethiopian Orthodox Tewahedo Church as that hope. Anthony Hamilton then organized a group of African Americans to form an Ethiopian Orthodox Tewahedo Church Mission. The Holy Liturgy was conducted in English and in Geez. This Church was open to all people, particularly African Americans and West Indians.

Due to the large amount of Ethiopian Nationals in Los Angeles an additional parish was established in 1983 dedicated to Saint Mary of Zion. Father Amde Tsion and Abba Yesehaq did great works with the community of Watts California and with the Youth Gang Home for Young Men. Bob Marley also visited the church in Watts at the request of Father Tsion. Father Tsion was skilled with pen and speech; a poet with The Watts Prophets. Church missions were also established in the communities of San Francisco, Oakland, San Jose, and Washington D.C.

The Ethiopian Church in Canada was established by Abuna Yesehaq then Abba Laike Mandefro on July 23, 1972. It is located at 425 Vaughan Road, in Toronto, Ontario, in a building which was purchased by the faithful. For thirteen years, services had been conducted at the St. James Bond United Church premises through the kindness of their membership. The church is headed by an archpriest (L. K. Messale Engeda). The membership is Western-born as well as Ethiopian.
(Yesehaq, 195)

In New York, nothing could have been more opportune than the appoinment of Abba Gabre Igziabeher Degou [Abba Samuel] as Head Priest in September 1960. He set up the general council of 24 members and the Board of Trustees with 7 members. He taught Amharic in Sunday school and set up church groups for the women and youths. He also set the "Divine Army" evangelists preaching the Gospel from an African perspective from street to street while also raising funds. The church was a sanctuary for African students also. "...Presently we have students from Kenya, Nigeria, Ghana, Liberia and Somalia. It is the conviction of these students that the Orthodox Faith become Africa's religion....in the short term the presence of Africans in our church would help us gain more converts in the black community. Moreover, since there exsists a pervasive belief about Ethiopians not wanting to be associated with blacks our embrace of Africans would help offset such stereotypes"
(Fikru Negash Gabre Kidan; pg 205) 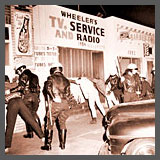 There are many churches and church organizations which are established and administered by black ministers and followed by black congregations, but none of them are relevant to the life of the black people as they are structured after the pattern and life-style of the European communities. As long as the Africans and their descendants continue to live in the life-style of other nations, they are still in captivity and their liberation is not yet certain.
(Abba Yesehaq) 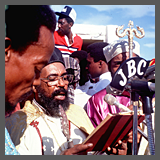 A real productive life which meets the needs of the people, and the need for new patterns and efffective participation, in the decision making which determine their future life, can only be obtained through LIBERATION. In this case Liberation becomes the Mother of achievement for a new progressive and productive life. On the other hand, dependency demands the opposite in the improvement of one's life. (Abba Yesehaq) 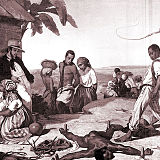 The africans wanted to be free, and they proved this with the blood of their masters, both the kind and the cruel. Slaves destroyed innumerable crops and lives, and much damage was done to property. Abolitionist Christians in Europe and the islands said if men were the sons of God, then why should one brother hold another in abominable servitude? William Wilberforce the most noted abolitionist awakened many to the cause of Africans' freedom and succeeded in getting the slave trade abolished in 1806. In 1833 the queen, who at the time was Victoria, signed the Emancipation Act to free all slaves in all British possessions, including Jamaica.

And I saw another angel ascending from the east, having the seal of the living God: and he cried with a loud voice to the four angels, to whom it was given to hurt the earth and the sea, Saying, Hurt not the earth, neither the sea, nor the trees, till we have sealed the servants of our God in their foreheads.[Rev:7 Ch:2-3]