Throughout its history in Jamaica, the Church suffered greatly because of it's involvement with some Rastafarian faithful whose desire is to motivate their lives through the church. Also, the whole community was reluctant to accept the church because they were unaware of its existence, its history, and connection to the Church of Christ, and also because fifty percent of the membership's respose came from the Rastafarians.

Jamaica is a small island in the Caribbean with a population of about 3.5 million. Beautiful and exciting, it is a great tourist attraction. It is just 90 minutes from Miami by air. The weather in Jamaica is good although exhaustingly hot some days. At night it is very comfortable. The people are kind and friendly. Religion plays a great part in the life of the nation.

Jamaica has more churches per square mile than most other nations in the Caribbean, and this has had a profound influence upon the people.  Christopher Columbus came there in 1494. He landed at what is today called Discovery Bay. In describing the island to the king and queen of Spain, Columbus crumpled a piece of paper and placed it before them. The crumpled paper represented the mountainous character of the island.

The island is known as the Land of Wood and Water. On May 23,1655, the British, captured the island by the hands of Adm. William Penn and Gen. Robert Venables for the Lord Protector of England, Oliver Cromwell. It was done after a failed attempt to capture the larger and seemingly more important island of Hispanola in order to not return to England empty handed. The island was sparsely populated and was taken without a shot being fired. The Spanish then fled from what is now called Runaway Bay.

The major significance of this conquest is that a large number of africans who were captured and brought to Jamaica by the Spanish then fled to the hills for their freedom. These freed africans, called Maroons, fought adamantly for the maintenance of their newfound freedom. The Maroons had many bloody clashes with the British through which they secured their liberty. They could not be defeated, and since they were a headache to the British when they were molested, the British decided to leave them alone. A signed peace treaty made the Maroons an independent people and the first African slaves in the New World to gain their freedom.

Thus the Maroons became a nation within a nation and so it is to this day. This victory was possible through the brilliant leadership of one of the Maroon chiefs, Kojo (Cudjoe-Eng). He could be called the Light of the Independence Movement.

Beginning in the 18th century Evangelical Protestant missions played an important role in bringing the Gospel to the other captured africans brought to Jamaica by the British in the process of their liberation and education. These missions include the Moravian church which first came in 1754 from Central Europe. The Methodist church came in 1790 and the Baptist in 1783 beginning with Reverend Lisle, a manumitted slave from the United States. The moral question of slavery was to surface in the ensuing years. The era of the abolitionist was upon all.

The africans wanted to be free, and they proved this with the blood of their masters, both the kind and the cruel. Slaves destroyed innumerable crops and lives, and much damage was done to property. Abolitionist Christians in Europe and the islands said if men were the sons of God, then why should one brother hold another in abominable servitude? William Wilberforce the most noted abolitionist awakened many to the cause of Africans' freedom and succeeded in getting the slave trade abolished in 1806. In 1833 the queen, who at the time was Victoria, signed the Emancipation Act to free all slaves in all British possessions, including Jamaica. In the years following Emancipation the desire to be free did not end with the physical liberty, but, deep down in their hearts the people wanted to do what others were doing for them to their dissatisfaction. They wanted self-government. It was in Stony Gut, Saint Thomas that the birth of the movement for the independence of the Jamaican people took place 32 years after Emancipation. A rebellion against colonial rule broke out after a delegation led by Paul Bogle walked from St .Thomas to St. Catherine (a distance of over 100 miles) to present their case to Governor Edward Eyre, the Crown's representative in Saint Catherine. They walked to the Governor's residence in Spanish Town, the capital.

Some of the Jamaican population have continuously sought their African roots. One champion of this was Marcus Garvey. His cry for love for self and motherland was taken to heart by many, and thus he left a legacy for his island people and the black world in general. During the 1930's when the last bastion of African Freedom and Hope; Ethiopia, was under siege, the Jamaican people, who identified with their true heritage, led in particular by the Garveyites, formed a young strong group called the Rastafarians, after the name of Ras Tafari, H.I.M Haile Selassie I.

This was in response to the cry of their besieged motherland, Africa, and their only hope of racial and national salvation. Rastafarians are adamant in their belief that Haile Selassie I is "the returned Messiah" and that the "Spirit of God who dwelleth in Christ now dwells in H.I.M" They base their belief on the Scriptures. Anything concerning Eyesus Kristos in the Old and New Testament is attributed to the Emperor. They say that God was merciful to the Motherland and delivered her and all her children the world over. It was the rape of the motherland that truly pulled out of all and each other, faithful sons and daughters, a deep down feeling that they were, before then, unable to interpret. Ethiopia made her voice heard throughout the world during the reign of Emperor Haile Selassie I. Jamaicans listened and they have not since turned a deaf ear to the motherland, Ethiopia. 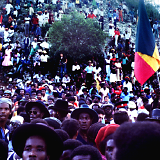 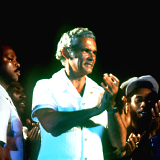 In welcoming Archimandrite Mandefro Mr. Manley said that his presence symbolized two things, which he regarded of significance to Jamaica – the new dialogue between Africa, Jamaica, and the development of closer relations between church and state. 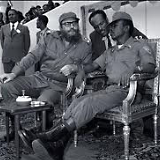