*(The view of the white world to the battle of Adowa)

Horrible Affair!
Great was the Carnage at Adowa
Five Thousand Italians Killed; and about that Number Wounded

Rome, March 4.-
The kingdom of Italy today is in a condition of excitement, grief and anger, almost beyond description. Words cannot adequently portray the situation, for every dispatch received from Massawa adds to the gravity of the disaster to the Italian army at Adowa. Abyssinia. When the first news of General Baratieri's defeat reached this city report had it that only 500 men were killed; then, yesterday afternoon, the numbers ran up to 3,000 killed, with sixty'pieces of artillery captured and this morning's dispatches place the number of Italians killed at the battle of Adowa and in the long, harraising retreat which followed at 5,000. and it is believed that not even these figures tell of the full extent of the disaster

Reports from the Defeat

In these reports no mention is made of the wounded, and there is good reason based on stories of recent Italian defeats by the Abyssinians, but those who fell wounded daring the retreat of over fiity miles met a more horrible fate than those who were killed on the spot. Throughout the night the garrison here was kept under arms and mounted patrols traversed the principal streets. The masses, however, do not seem to have retired to rest The streets were filled with people until daybreak and after early morning every public place was crowded with excited men and women.

Under these circumstances it is not astonishing that the wildest kind ot rumors are in circulation and that in some of the clubs, the number of killed and wounded is placed at 10000.

A number of disturbances which have called for police interference have occurred today. The indications are that people are assuming a most threatening attitude, not only in Rome but throughout Italy. Demonstrations against the Crispi ministry and even against the crown are reported from a number of towns in the provinces, in spite of the fact that the authorities are straining every nerve to suppress all alarming news. It is said that the government was aware on Tuesday of the full extent of the defeat inflicted upon the Italians, but it was judged to be dangerous to allow the startling information to reach the public suddenly, and so the first report o' the defeat was allowed to leak out. Then the war officials allowed it to be "rumored" that 500 men were killed; after this came the report that "3,000 soldiers had fallen." and now it is "admitted" that 5,000 Italian troops were slain, in addition to severe loss among the native troops serving under the flag of Italy.

Exaggerated as these figures may turn out to be. they show the state of public mind here. All fetes have been indefinitely postponed, masses for the repose of the souls of the dead have been celebrated this morning in every Catholic church in this city and crowds of weeping women and sorrowing men were in attendance. The receptions, etc, in celebration of the coronation anniversary of the pope have been dispensed with. Rome. in a word, is today a city of mourning and of sullen anger, ready to break out into fierce, open resentment.

The government and the military authorities are charged with gross mismangement of the Abyssinian campaign and great indignation is expressed against the newspapers which have been goading General Baratieri into action by taunting him with his inactivity. It is also said now that the Italian commander was led into a trap skillfully baited by the report which was allowed to reach him that a number of the important chiefs of the Shoans, attended by a portion of the Shoan army, were attending the coronation of King Negus, at Axum, and that hoping to surprise those who remained behind, General Baratieri ordered Generals Albertone, Arimondi and Dabormida to attack the enemy. The latter, it appears, pretended to retreat before the Italian advance until the troops were well within the passes leading to Adowa, the capitol of Tigre. Then the scene changed. 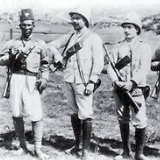 "..The realization of Italy's determination to wipe out Ethiopians completely as a race, prompted offers of negotiation from several quarters." 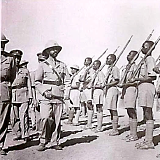 "My people and I beleieve that the Almighty God, who cares about the loss of one bird, is even more concerned about the decimation of an entire people. In this we take comfort." [H.I.M] 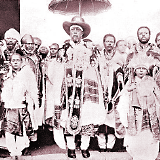 "I left my country not to sell it but to seek justice for my people and my country. The history of Ethiopia will not be despoiled by a guinea stained with the blood of Ethiopians" [H.I.M].

"...Behold the land of Ethiopia, be cursed all those who accept the enemy". [Bishop Petros]