It is not the ideological name such as Democracy, Republican, Communism or any other style or name given by any goverment that makes life better for a nation. It is hard to achieve a change of life through these unbelievable names. Such ideological forms are untrue for themselves. They are the creation of the smart man and are of little help to the general welfare of human dignity. They are effective instruments for the smart fellow, their creator.
(Abba Yesehaq)

The establishment of the church in New York was the result of the Ethiopian World Federation which was established by Dr.Melaku Beyene 1937, during the occupation of Ethiopia by Mussolini. The aim of the federation was to promote unity and solidarity and teach the history of Africa among all black people, and it was helpful in the introduction of the history of Ethiopia to its members.

Although it was a political organization, the federation became a source of inspiration and a route for the advent of this ancient Christian church in the Western World. Several years before the official establishment of the church in the United States, constant contact was kept between the interested group and the mother church in Ethiopia. His Holiness Abuna Basilios the Late Patriarch of Ethiopia, before and after he ascended the spiritual throne of the church corresponded with certain members of the group led by Father John Divine Hickerson, an American who was not officially ordained but was a pro-African.

He was a man of vision who was responsible for the coming of the church to the West. Ultimately a promise was made by the authorities in Ethiopia to officially set up the Church in the United States at the opportune time.

In 1952 Father Gabre Yesus Meshesha (Abuna Athanasius) and Ato Abera Jembere were sent to the group with articles for the church and sacrament books for the members. In 1954 Archbishop Theophilos visited the United States to reassure members that the promise would be kept, that the church would be set up, and he himself would return. On October 25, 1959 the great day finally arrived His Holiness at the time known as His Grace Abuna Theophilos, archbishop of Harar Province and assistant patriarch of the Ethiopian Orthodox Church, officially set up the church in the United States.

On that date 275 converts were baptized by him, also the parish in New York was dedicated and named Holy Trinity Ethiopian Orthodox Church. His Grace Archbishop Y. Samuel of the Syrian Orthodox church was spiritual adviser. A building was purchased by the members and was dedicated by His Holiness Abuna Theophilus in december of that year the first building owned by the Ethiopian Orthodox Church in America. It was located in Brooklyn at 726 Gates Avenue and was named Saint Michael the Archangel. A more suitable building was needed for the church, the purchasing of which was left to His Eminence Abuna Yesehaq at the time known as Abba Laike Mandefro and members of the congregation.

Initially they experienced great difficulty locating a suitable building and raising adequate funds for it's purchase. With the faithful assistance and diligent work of the membership, a building was purchased at 43 West 126th Street in New York City early in 1966 to house the Holy Trinity Parish. After the building was purchased His Eminence Abuna Yesehaq left for Ethiopia to seek assistance for renovations. Unfortunately, the building was taken by New York City authorities in his absence.(Yesehaq, 192)

On Thursday, January 24, 1985 a party comprising Brother Wolde Hawariat
(Paul Blake) of Jamaica, Sister Meserete Hiwot (Caroline Burgess, of Bermuda, executive secretary of the Western Hemisphere Diocese of the Ethiopian Orthodox), and His Eminence Abuna Yesehaq traveled from New York to Saint Thomas in the U.S. Virgin Islands. The purpose of the visit was to establish an Ethiopian Orthodox mission on the island of Saint Thomas. It was indeed a very historic occasion. Upon arrival at the Cyril King Airport in Saint Thomas, they were welcomed warmly by the then manager of Pan American Airlines, Mr. John Knight, Senator Crickey Maynard of the Virgin Islands Senate, and Mr. Derrick Soninram, chairman of the Christian Council. A press conference was held at the airport lounge with local television, radio, and newspaper reporters.

A large crowd of prospective members were also gathered at the airport. A booklet entitled " A Brief Introduction to the Ethiopian Orthodox Church " was distributed. Prospective members, visitors and airport staff eagerly received the literature. The next day Friday, January 25, 1985 His Eminence visited the Lieutenant Governor of the Virgin Islands, Mr. Julio Bradey, Bishop Turner of the Anglican Diocese, and Father Julian Clarke, priest of Saint Andrew's Episcopal Church who had kindly granted His Eminence permission to use his church for marriage ceremonies, worship service, and baptisms. Later that day His Eminence was interviewed on the radio during a phone-in program hosted by native Bermudan, Ms. Arlene Ottey. 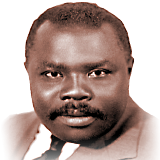 "...a greater future is in store for us; we have no cause to lose hope to become faint hearted. We must realize that upon ourselves depend our destiny, our future. We must carve out that future, that destiny ... Nothing in this world shall discourage us, but opposition shall make us work harder, shall bring us closer together, so that as one man the millions of us will march on toward that goal that we have set for ourselves." 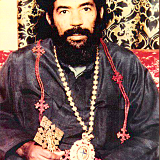 Woe unto you segregationists whose policy is only to create divisions among men. Woe unto ye hireling shepherds, for ye see the wolf coming to catch the sheep and ye flee away. Woe unto ye hired servants who commit yourselves to destroy your fellow man. Woe unto ye politicians who misused the power given you by God. "...It shall be more tolerable for the land of Sodom and Gomorrah in the day of Judgement than for thee." (Matt: 11 21-24) 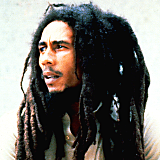 "Until the philosophy which holds one race superior and another inferior is finally and permanently discredited and abandoned, everywhere is war - And until the ignoble and unhappy regime that holds our Brothers in Angola, in Mozambique, South Africa is toppled and utterly destroyed, everywhere is war."

Oh racists "prepare ye the way of the Lord, make his paths straight, let every valley be filled, and every mountain and hill be brought low; and the crooked be made smooth." (St. Luke 3: 4-5)

"....Does the name Rastafarian, applied to an individual or group, diminish that individual's or group's humanity or citizenship? "For many years Rastafarians just existed; today they are seeking, with their own incentive, because of the Orthodox Church to establish themselves as citizens of Jamaica, the world, Black Men and children of GOD. ......From my own experiences with Rastafarians since my first visit to the island last year, I know them to be an honest, peace loving, God-fearing and very creative people and by their membership in an ancient Christian Church obviously do not oppose Christianity."
(The Daily Gleaner, Abba Yesehaq. 1971)

The idea of human rights was declared by the General Assembly of the United Nations on December 10, 1948. This was not supported by all the super-powers. The idea of Human Rights can only be effective by the result of its works and not by its name.

It is not the ideological name such as Democracy, Republican, Communism or any other style or name given by any goverment that makes life better for a nation. It is hard to achieve a change of life through these unbelievable names. Such ideological forms are untrue for themselves. They are the creation of the smart man and are of little help to the general welfare of human dignity. They are effective instruments for the smart fellow, their creator.
(Abba Yesehaq)

Machine guns are a disease and are effective instruments in dividing a nation against itself or creating war with its neighbours. When an argument starts between two nations no effort is made to stop the argument; weapons are provided instead. When two nations fight, all east and west fight, only to leave the earth with widows and orphans.