In most black churches today we see the traditional pictures that are painted of Christ through western eyes; thus a black child would find it very difficult, if not impossible, to identify himself with such an image. This is also against the philosophy of Marcus Garvey who rejected the concept of God as white and recognized that "God has no colour". Garvey teaches the black man to see beauty in himself, "...It is natural to see God through one's own spectacles. White people have seen God as white; it is proper therefore for blacks to believe in the God of Ethiopia." (Abba Yesehaq)

As is done with the establishment of the branch churches in Europe and in the countries of the Western Hemisphere, the church in Kenya was established in response to the request made by thousands of faithful residing in that country during the office of His Holiness Patriarch Theophilus.

In 1974 Neburaidd Ermias Kebede was sent by the mother church in Ethiopia to Nairobi where he met with Kenyan Government Officials with whom he discussed the establishment of a Branch Church in Kenya. The Government of Kenya graciously donated land for the church to be built upon.

Unfortunately circumstances in Ethiopia did not permit the erection of a Church building until a new effort was made by His Holiness Patriarch Tekle Haimanot and the Holy Synod. In 1985 a delegation was sent from the Ethiopian Patriarchcate to study the matter, after an extensive study and the obtaining of the required permission of the Sudanese government, the church was established in 1986 and was headed by Archbishop Elias.

It is worthy to note that the Ethiopian Church, being under the leadership of the Alexandrian See almost throughout it's history until the Reign of Emperor Haile Selassie First, who negotiated successfully the independence of the Church, was unable to propagate the gospel outside Ethiopia, now is able to stretch out her hands to East and West.

Before the church was established in the Sudan volunteer Ethiopian clergymen, such as Kes Tsegaye and Mamher Laike Mariam Beru, administered sacraments to the ethiopian community there. There was an increasing number of ethiopians immigrating to the Sudan, therefore the Mother Church decided to set up a Branch church there.  The church was founded in 1940 and is located at Nebretelata, Khartoum on land which was given by the government of Sudan. Half of the Finance for the construction of the church building was donated by Emperor Haile Selassie I and the other half by the ethiopian community itself.

The Ethiopian Orthodox Church Diocese in Djibouti was established in 1981. It had at that time a membership of 7,000 people. It was headed at it's establishment by an archbishop named Abuna Elias.

Tewahedo - F.Y.I
Ancient historical books of India states that civilization came to India from Ethiopia before it came to Egypt, and these ancient books mention the names of old Cushite Kings that were worshipped in India. Indranikos (Indrana) was called god of the Hindu and King of Ethiopia. After Him, Deva and Nahusha (Nahusanay) is mentioned. ** Persia, Jusiana, Media and Aria the whole territory between the Indus and Tigris was under the Cushite Kingdom. In Africa, the Ethiopians, The Egyptians and Libyans, the Cananites and Phoenicians were all descendants of Ham. They were the pioneers of today's civilization and culture.

The Eunuch who was very interested in religion as Irenaeus writes preached the Gospel to the Ethiopians. Other evidence is that during the time that the Eunuch preached Christianity, Ethiopian women wore crosses upon their foreheads signifying the recognition of the crucifixtion of Christ. Besides that St. John Chrysostom witnessed that among those who were present at pentecost ( the birth of the Universal Church) were Ethiopians. The Eunuch baptized Queen Candace in the first century A.D and since then Ethiopia has been ruled and governed by Christians.
Western historians and writers state that Ezana who reigned in Ethiopia about A.D. 320-356 was the first African King who became Christian and made Christianity the official religion of his empire. This is purosely done to make it seem that Rome was first and this would make Ethiopia Christendom’s second state after Constantine declared Rome a Christian state, but this is not so. The declaration of the doctrine of Christ by King Ezana in the fourth century was not done as a new introduction to the people but was done by the Emperor to prove himself as the true Christian leader of the nation and to make Christianity more effective throughout the nation. (Abba Yesehaq)

The introduction of Christianity into Ethiopia took place in the beginning of the first century A.D. 34, a few months after the death and resurrection of Christ, when St. Philip baptized the Ethiopian Eunuch as he was returning from the Passover feast in Jerusalem. This history is narrated in the Acts of the Apostles 8:26-39. The history of Saint Philip the Apostle baptizing the Ethiopian Eunuch is of great significance. The Eunuch was a man of high rank in Ethiopia, the finance minister of Candace, queen of Ethiopia.
Upon his return he preached the doctrine of Christ among his countrymen. He was the first to bring the news, although he was not called an Apostle as he deserved. Eusebius speaks of him as the first fruit of the faithful in the whole world. Further at that time Saint Mathew the Apostle preached the Gospel to the Ethiopians he won some converts to the new doctrine and then left the country.

The Book of the Contendings of St. Tekle Haimanot and the Fetha Negast state that in the beginning of the fourth century after Christ there came to Ethiopia a certain stranger/pilgrim to Ethiopia from Jerusalem with two young men, Frumentius and Sidrakos. They were welcomed to the home of Anbaram and were received graciously. That same night the pilgrim became ill with fever and after a few days he died. The two young men grew up in the house of Anbaram and learned the Old Testament and the custom and lifestyle of Ethiopia, including the language and traditional music. Frumentius was impressed by the devotion of the Ethiopian people to their God. 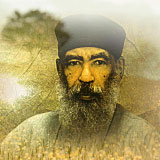 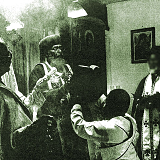 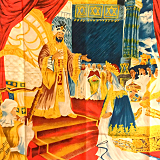 Even though there were always Ethiopians who from Adam retained the knowledge of the One True God; in the first millennium B.C during the time of the visit of the Queen of Sheba to King Solomon, the whole country officially accepted the belief in One True God. The Church to the people means their lives. Most people devote much time to worship and prayers. In some Monasteries there are holy men who do not talk at all throughout their lives. Ethiopian Christians are known to be deeply religious fasting often and worshipping.

Can Modern civilization be defined without its origin? For many years now the world has been injured by the opposite act of man towards the truth. Man has broken the laws of nature and has violated truth and morality.