Visiting Archimandrite Laike M. Mandefro Head and Administrator of the Ethiopian Orthodox Church in the United States, on Wednesday afternoon paid a courtesy call on the Parliamentary Secretary in the Ministry of External Affairs, Dr. Neville Gallimore at his Ministry, Dr. Gallimore welcomed the Archimandrite to Jamaica.

Both men then discussed the proposed establishment of a branch of the Ethiopian Orthodox Church in Jamaica. The Archimandrite disclosed that there would be a baptism of 300 souls in Jamaica shortly and that he hoped to have a pastor from Africa to guide them. He also said that the Ethiopian Orthodox Church was one of the oldest Churches on earth dating back to the visit of the Queen of Sheba to King Solomon.

Deacon Gabre Tsadik of the Ethiopian Orthodox Church has been in the island for some time now conducting services and Instruction Classes for more than 600 persons who have registered to become members of the Church in Jamaica. Deacon Tsadik will be in Jamaica until July 19. In the meantime he is conducting services and instruction classes at Ebenezer Hall, Spanish Town Road at 10:00 A.M. and 3:30 P.M. on weekdays and at 7.00 p.m. on Sundays.

In an interview with the GLEANER, Deacon Tsadik said that he is Impressed with the Religious spirit that exists here. Jamaica in this respect, he said, is to be compared with Ethiopia. He said over 140 new candidates have already been enrolled for baptism. Deacon Tsadik said that Archimandrite Laike M.Mandefro is expected to arrive in the island in September to conduct baptisms and further instruction classes.

Following his recent visit to Jamaica the Archimandrite wrote to the Patriarch of the of the Church in Ethiopia, His Grace Abuna Theophilos advocating the sending of "...a priest of high and noble character" to Administer the Church in Jamaica.

The Patriarch, Deacon Tsadik said, had now written to the Archimandrite giving him jurisdiction over the Church in Jamaica, as well as in the United States. Registrations are being received 4:00 P.M. – 6:00 P.M. at Ebenezer hall as well as during the 3:30 P.M. services. Registration secretary is Mr. G. Arscott who is also Secretary of the Board of Trustees of the Holy Trinity Ethiopian Orthodox Church here. Following a special Sunday morning service, to be held at a venue to be announced, Deacon Tsadik will be' accompanied by a motorcade around the Corporate Area, ending at the Pallsadoes Airport from which he will depart for New York at 2:30 P.M.

Out of this alienation with its related back to Africa call, those who longed for liberation echoed the theological scandal of Western civilization. It is the same scandal of two thousand years ago — that Jesus of Nazareth was the Messiah, the Son of God. In our time its manifestation came in the person of His Imperial Majesty Haile Selassie I of Ethiopia. The Rastafarians of Jamaica proclaimed him as God's Messiah and today the question is not whether or not there is objectivity in the claim, the living truth is that thousands of people in Jamaica, the Caribbean and North America lead very disciplined and moral lives in accordance with such a belief. For these conformists, to the scandal theology is a living people orientated matter; and for them, the poor and wretched of the earth, the highest expression of their spiritual longing has been realized in the person of an African King from the lineage of King Solomon.

September 30, 1967
A "First" in liturgical relations between Ethiopian Orthodox and United Presbyterian churches was marked recently when the Ethiopian mass was incorporated into the 10:30 a.m. worship service at Trinity United Presbyterian Church, Paramus, New Jersey. The service was conducted jointly by Father Laike Mariam Mandefro of the Ethiopian Orthodox Church, the Bronx, New York, and the Rev. Robert Hugh Reed, pastor of the Trinity congregation. Father Mandefro was assisted by several Ethiopian students currently studying in the United States. The students were weekend guests of Trinity Church families. 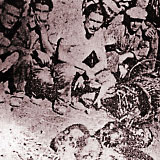 "...As if the blood they spilled in Ethiopia was not enough, the Italians were working to get Ethiopia expelled from the League of Nations." [H.I.M] 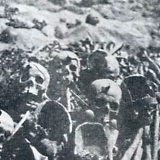 "...Italy and her supporters put forward a suggestion that no country should retain its memebership after its capital city has been occupied. On the other hand they presented a forged document which it purported [to show] that the people of Ethiopia had contentedly accepted Italy's governorship" [H.I.M] 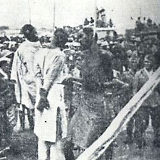 "...The countries which opposed Ethiopia were Austria, Hungary, Albania and Ecuador. The six countries which abstained were Bulgaria, Panama, Portugal, Siam, Switzerland and Venezuala." [H.I.M]