The Decline of the Ethiopian Empire and the End of Christianity in Southern Arabia.

By the Eighth century the Axumite Kingdom had lost its territories in South Arabia. This was due to the rise of Moslems, who occupied the Ethiopian coast and surrounding territories. Abraha King of South Arabia was very unhappy about the pagan pratices in Mecca and Other areas, which caused him to become hostile towards the Persians and the Arabs.

As stated in the Koran, around the year 540 "...an expiditionary force was sent by Abraha to attack the shrine at Mecca which was still pagan at this time." The Attack was unsucessful.

In retaliation, in the year 572 North Yemen was attacked by the Arabs. This ".... allowed a Persian fleet to penetrate by way of Aden and thus occupy the country without the use of force.... The Persians continued to advance and by 602 the entire peninsula was occupied." This was a great loss to the Byzantine and Ethiopian Empires. Abraha and his succesors became the victims of Persian conquest. South Arabia was first ruled by Persians and later by the Arabs.

The latter grew too fast, were too advanced, and became too dangerous. They lost no time in cutting off the connections between the Ethiopian and Eastern Christian churches.

The Ethiopian Empire was completely cut off, not only from its South Arabian territory, ".... but also from its commercial outlets." It was cut off from all Mediterranian contact. When the main conquests by Caliph Omar (A.D 634-44) occured, the Byzantine Empire was pushed out of Syria altogether.
Armenia was overrun and Mesopotamia and Persia were conquered. Egypt passed passed almost completely from Christianity to Islam. Ethiopian Christianity was cut off from the rest of Christendom.

Even the link with Alexandria was discontinued for a while. The world heard no more about the Church of Ethiopia until the fifteenth century, when a mission went from Ethiopia to Rome. The Ethiopian delagation at the Council of Florence was a surprise to the rest of Christendom. It was said that the continuous Christological dispute between the Christian churches had contributed to weakening Christianity and encouraging the Islamic religion. Perhaps this is a good lesson for future prospectives on Christian Unity.

Tewahedo - F.Y.I
Harar was one of the earliest Moslem centers in the reigon of Ethiopia sometime during the first part of the 16th century; it became the capital of the Walasma state of Adal. It was from Harar that Imam Ahmed Ibn Ibrahim (Gran) launched his campain to destroy Ethiopia in 1529 A.D. Harar continued to serve as the captal of the Walasma rulers until 1577 when they were forced to move to Awasa because of the Oromo warriors who began to occupy the Harar Plateau. It was also at this time that Harar came to have it's famous wall built to defend the city against the Oromo. The wall was built by Emir (the Murderer) Nur.

The Axumite Empire, which was completely cut off from the rest of Christendom, had no other choice but to establish close ties with Islam. When Muhammad first began promulgating his religious teachings his followers suffered persecution under the Quraish in Arabia and were advised by Muhammad himself to take refuge in Ethiopia, ".... The land of righteousness where no one is wronged." The refugees were recieved kindly by the Emperor Armah. The emperor was approached by the Quraish, who sent an ambassador with rich gifts requesting the surrender of the refugees. Emperor Armah returned the gifts, saying, ".... If you were to offer me a mountain of gold I would not give up these people who have taken refuge with me."
Afterward, the refugees were handed over to Muhammad. A good relationship was established between Muhammad and the Ethiopian Empire. It was said that Muhammad had instructed his followers never to enter into any dispute with the Ethiopian Empire but to maintain a good relationship. This relationship was short-lived, however, as the plan of Islam was to eliminate Christianity from the face of the Earth. Muhammad's sucessors could not resist attacking the Christian Ethiopians. ".... They captured Massawa and the Dahlak Islands subsequently sacking and setting fire to Adulis", The Axumites were finally driven from coastal areas and reduced to a political nonentity.

"..send me your embassies which I much desire from a brother. I do not wish for Ambassadors from the Moorish Kings, they do not hold me as a friend on account of the faith, but much profit accrues to them and they take away from my Kingdom much gold, of which they are great friends, and of me little; and if I omit to make war upon them, and to destroy them, it is in order not to destroy the holy house of Jerusalem, in which is the tomb of Eyesus Kristos, which God had left in the possesion of the vile Moors".

While Emperor Lebne Dengel's preparations were progressing slowly, along the Red Sea coast of Ethiopia Moslem influence was growing stronger and stronger. Adal Zeila in Northern Ethiopia at the time near Berbera became a centre of Islam. Much of the trade with Arabia was conducted through Zeila where many Moslem Arab traders had settled. These Moslems Arabs enemies of Ethiopia and the Church got the opportunity to express their hostility when they began receiving arms and encouragement from the Turks to conquer the country.
(Kesis Dr. E.A Abebe, The Ethiopian Church History: pg, 31) 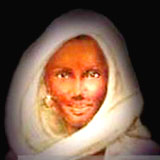 Native Born enemy of Ethiopia, daughter of the Pirate Mahfuz and wife of Ahmed Gran. She inspired the war against Ethiopia as revenge for her Father's death. 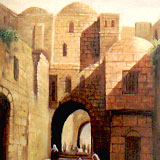 Adal where the enemies of God lived

Can Modern civilization be defined without its origin? For many years now the world has been injured by the opposite act of man towards the truth. Man has broken the laws of nature and has violated truth and morality.