The Ethiopian church in Jerusalem was one of the first established Christian churches there. Soon after the resurrection of our Lord Eyesus Kristos, Ethiopian monks and holy men and women as well began streaming to the Holy Land, many of whom never returned home, but lived a holy life there instead.

Der Seltan is a place where the Holy Sepulchre stands and the Ethiopians have built a monastery that has been the main center of their religious activities. Ethiopian tradition asserts that this place was first given to the Ethiopians by King Solomon during the visit of Queen Makeda to him in B.C. 1000 and it was used as shelter for officials who from time to time visited Palestine.

One of them was the famous Eunuch, the finance minister of Candace, queen of Ethiopia. “ Emperor Constantine, who built a basilica at the site, acknowledged this fact.” The fireman of the kalif Omar (A.D. 636) considered the claims for religious rights in Palestine, gives the following description of the places in the Holy City, including the Temple of the Resurrection and the Church of Bethlehem, and also the religious denominations and their positions states
“…let the Ethiopian community be there” (remain there). But“…all other nations who go there for their pilgrimage, the Latins, Copts, Syrians, Armenians, Nestorians, Jacobites, and Maronites, must submit to the said Patriarch Sophronios of Jerusalem…”

it is obvious, therefore, that in the early days, the Ethiopians had established themselves and had possession in certain holy places.

Father Doubdan in 1661 wrote concerning the possession of the Ethiopians at the Holy Sepulchre. He stated that he went to the “…parvis of the Holy Sepulchre to see the dwelling of the Abyssinians who are the subjects of Prester John, Primate” - (Emperor Lebna Dengel of Ethiopia). He states the dwelling is on Mount Cavalry and upstairs he saw a terrace at the entrance where there was an olive tree in the form of a wild bush where Abraham found a ram attached by it’s horns, which he sacrificed instead of his son Isaac. Father Doubdan says that “…the Abyssinians to whom it belongs take great care to preserve it”.  Another monograph dedicated to the holy place goes like this: “The Monastery of the Abyssinians is situated over the Chapel of Saint Helen; adjoining in the front, the East of Calvary, they own a special chapel from which a passage leads to the parvis of the Church of the Holy Sepulchre; the Chapel of Saint Helen really belongs to them, but they have already long ago handed it over to the Armenians.”

One of the oldest written documents about Ethiopian possession at Der Seltan is described in the book of Padre Francesco Verniero: Chroniche Ovvero Annali di Terra Santa. Verniero who lived in the Holy Land between 1631 and 1647 stated that the Ethiopians owned “a place in front of the square of the Shrine of the Holy Sepulchre.” He stated that the Ethiopians also owned a church on Calvary where Abraham led his only begotten son Isaac in order to sacrifice him. Further he saw that Ethiopians had possession of a small Chapel where the soldiers divided and cast lots for the garments of Christ.

Another Italian pilgrim Barbone Morsini stated that the Ethiopians had possession of “ The Chapel of the disgrace (the place where Christ sat after having received the crown of thorns). The two Chapels of Saint Mary of Golgotha and Saint John, The Chapel of the sacrifice of Isaac and of the offering of Melchisedek and the adjacent monastery. The grotto of David on Mount Sion and an altar at Bethlehem the place where Christ was born.”

Also in the fifteenth century Ethiopians possessed an altar at the sanctuary of the Virgin Mary’s tomb in Gethsemane. These and other properties in the Holy Land were in the possession of the Ethiopians however between the seventeenth and nineteenth centuries all these ancient properties were lost except Der Seltan. This occurred for several reasons, when the Turkish Ottoman Empire occupied the Ethiopian seaboard communication between Ethiopia and Jerusalem became difficult and the Ethiopians began to suffer economically and “were obligated to accept the charity of the Armenians who as Turkish subjects took advantage of the situation to seize some of the ancient properties of the Ethiopian Church ecclesiastics.” In 1838, during the unfortunate plague that ravaged the Holy City all the Ethiopians perished. Samuel Gobat the Anglican bishop of Jerusalem records that “...when the last Ethiopian had died…the Coptic Priest took the keys of the Ethiopian convent and of a Chapel belonging to it.” And this was done “...at the instigation of the Armenian Patriarch, who has since claimed the right to dispose of both the convent and the Chapel.”

Not only were the keys taken but in order to prevent the Ethiopians from defending their possession, Gobat stated that“ …their library, containing many valuable manuscript books, was entirely burnt by order of Ibrahim Pasha, with all the documents that might have served them to recover their property…I myself have seen the library…together with such documents, and that all those…books and documents were consigned to the flames on the aforesaid occasion is most notorious in Jerusalem.”

Hundreds of Ethiopians still flocked to Jerusalem regardless of the circumstances at that time and were treated like Gobat tells us “ …they were treated like slaves, or rather like beasts by the Copts and Armenians combined.” It is sad to note that the Ethiopians had to suffer under not only the Turks but also the two sister churches the Copts and the Armenians who have also from time to time attempted to take the properties belonging to the Ethiopians. This situation lasted and got far worse until the Ethiopians by the late 1800’s were living in a state of misery in a convent consisting of miserable huts and caves close the Holy Sepulchre. Being deprived of their places of worship they could not even celebrate the Eucharist. The help of God reestablished beginning in 1882 to 1889 during the reigns of Emperor’s Yohannes IV and Menelik II communications between Ethiopia and Jerusalem. This vastly improved the situation until now Ethiopians have new possessions in the Holy Land including the Kidane Meheret (Covenant of Mercy) Monastery dedicated to the Holy Virgin Mary started by Emperor Yohannes and ended by Emperor Menelik.
It is interesting to note that from the time Ethiopia was converted to Christianity, Emperors, Empresses, Kings, Queens, Noble Men and Ladies have made it their duty to support financially the Ethiopian community in Jerusalem, to build churches, monasteries, and convents, giving gifts in gold and silver. Especially the Emperors who have been protectors of this Holy City and have donated their own royal crowns as an offering the birthplace of the Lord Christ.
(Ethiopian Tewehedo Church, Abba Yesehaq, p.185) 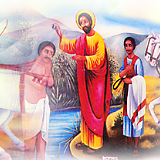 The introduction of Christianity into Ethiopia took place in the beginning of the first century A.D. 34, a few months after the death and resurrection of Christ, when St. Philip baptized the Ethiopian Eunuch as he was returning from the Passover feast in Jerusalem. 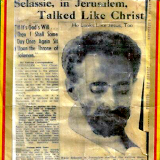 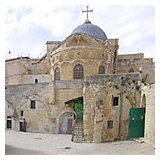 “… let the Ethiopian community be there” (remain there). But “ …all other nations who go there for their pilgrimage, the Latins, Copts, Syrians, Armenians, Nestorians, Jacobites, and Maronites, must submit to the said Patriarch Sophronios of Jerusalem…” it is obvious, therefore, that in the early days, the Ethiopians had established themselves and had possession in certain holy places “…when many other Christian communities were known there as pilgrims only.”