In the beginning of the brilliant era of the Egyptians in the 4th Dynasty was the true Ethiopian Pharaoh Khufu,
builder of the great Pyramid and the temple of Isis. (Baldwin, Prehistoric Nation) 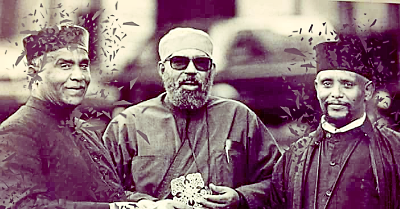 "...Wether they are orthodox or not I am responsible."

Amenemhet I who established the Twelfth Dynasty is also mentioned as a great Ethiopian leader of the Middle Kingdom. It was said that Theban glory began during this Monarch’s reign. After him Amenemhat II, Usrtesen I, and Amenenhet III were Ethiopian Pharaohs.

He was the first of a long line of conquering Pharaohs. After him Thothmes III is mentioned. During his 54-year reign Egypt became the center of Trade and Commerce. Thothmes III’s domain extended over Syria, Mesopotamia, Arabia, Armenia, Nubia etc., he was a builder.

“Under his son’s leadership Amenhotep II, the Egyptians captured Nineveh. Then Amenhotep III and Amennophis IV are mentioned this was Dynasty XIX (1400-1280 B.C).
Other Ethiopian Pharaohs of this Dynasty are listed Ramses I and Seti I, who restored the waning glory of Egypt and Ramses II who reigned 67 years.

He had 59 sons and 60 daughters. The Ethiopian Tradition also mentions Sabaco and Tirhakal at this dynasty. In 800 B.C Pianki made Thebes a simple province and the ruling power was at Aksum.

It was during Tarkaka’s reign that Egypt was conquered by the Assyrians. In 660 B.C Psammeticus of Libyan origin opened the door to foreigners especially the Greek.
Then Egypt became the victim of Persian Conquerors. By 332 B.C Alexander the Great visited the country only to end the African Glory. Amongst the Thirty Dynasties of Egypt the Fourth, Twelfth and Eighteenth Dynasties were the great Periods of Ethiopian Pharaohs.

The Past Culture trip