"...The British, took all the military equipment captured in our country.... openly saying it should not be left for the service of blacks"
(Emperor Haile Selassie First)

The essence of the development of the Ethiopian church is always to be found in its history. As can be seen from the following simplified account, it was a signal for the beginning of the main task to be accomplished in the future. A real productive life that meets the real needs of the people and the need for new patterns and effective participation of the people in the decision-making that determines their future life can only be achieved through liberation.

In this case dependency demands the opposite in the improvement of one’s life. The church being free shows with great evidence that the major problems of society are being solved and the needs and hopes of a large number of people are being realized. (Yesehaq, 83) From the beginning the Ethiopian church was affiliated with the See of Saint Mark of Alexandria. After Abba Selama (Father of Peace / Frumentius) first bishop of Ethiopia, died, Egyptian bishops from Alexandria were appointed to head the Ethiopian church. This continued until the time of Emperor Haile Selassie I.

This was done for two reasons, one reason being that Ethiopian church fathers do not as a tradition seek after their own glory but would rather delight in the glory of others. Besides this the saying “…a prophet is without honour in his country.”(John 4:44) is much respected among the Ethiopians. For this and other reasons Ethiopian church fathers resisted appointments to higher position for a long time. This still occurs today when a position is offered to some church fathers they will hide themselves until they are certain the position has been given to someone else.

The second reason is in respect to the Egyptian claim based on the Council of Nicaea (A.D 325) which states that Ethiopians are forbidden to appoint a patriarch from among their learned men, nor can they elect one of their own will, that their spiritual head was to be under the jurisdiction of the Patriarch of Alexandria for life. Such a claim based on this matter could hardly be related to the Christian principle and to the God given freedom. The leadership by the Alexandrian patriarchate over the Ethiopian Church had been maintained strictly until the twentieth century and the Ethiopians had humbly accepted this with reverence. However due to problems and poor communication caused by language, it was very necessary for the Ethiopian Tewahedo church to have Ethiopian born bishops who could without difficulty speak the national language, Amharic as well as Geez, the classical language of the church.

In 1926 after the death of Abuna Mathewos, Emperor Haile Selassie I, then Ras Tafari, began to negotiate for the appointment of an Ethiopian-born bishop to be head of the church. This was agreed upon by His Holiness Patriarch Cyril V and by the Holy Synod of the Coptic Church. In May 1929, five Ethiopian-born bishops were consecrated for the first time in the history of the church. Archbishop Qerillos, born in Egypt, was consecrated as metropolitan. Unfortunately all five Bishops were murdered by the Italian Fascists during the occupation of Ethiopia (1935-1940) by Mussolini. It was one of the plans of Mussolini(*vatican) to separate the Church from its link. About five other new "Bishops" were appointed by the Italians, to take the place of the victims, among whom Abba Abraham was set As Metropolitan. These new Bishops were considered by the people of Ethiopia no less than the black shirt fascists, who had done great damage upon the people and the Church.
[* April 6, 1971, the Church reached the highest position of Patatriarchal SEE, when Abuna Theophilos was elected Patriarch in Addis Ababa, as the succesor to Abuna Basilios the first Ethiopian Born Patriarch who was consecrated in Alexandria and died in 1970. Of course this does not mean that the link with the Alexandrian Church was broken. It is rather done to ackowledge the proper right of the Ancient Christian Church.]

At the end of five years when Emperor Haile Selassie returned from Geneva and England, having accomplished his mission and resumed his leadership, all five bishops who had been appointed by the Catholic Church were excommunicated by Abuna Cyril of Alexandria. After five tragic years, The Emperor sent a delagation to Alexandria to study the possibility of obtaining the full right for Abuna Querillos to consecrate an Ethiopian Archbishop with the ..."Power to consecrate the Ethiopian Hierarchy". This demand was refused during the time of Patriarch Macarius III. In december 1945, The Ethiopian Church expressed the desire to sever relations with the Coptic Church if no satisfactory solution to the Ethiopian request could be found. However, in 1948, five other Ethiopian Bishops were consecrated, and one of them to act as Archbishop in the absence of Abuna Querillos.

In 1950, Querillos, the last Egyptian born Bishop died, and in 1951, Abuna Basilios, an Ethiopian was elevated to office and was consecrated in accordance with the Agreement made with the Alexandrian Patriarchate. During the time of Cyril VI, the matter of the Ethiopian right was seriously discussed and in 1959, a complete independence was granted to the Church of Ethiopia, provided that the two Sister churches are canonically attached. The decision to take this action was a result of long effort by Emperor Yohannes and Emperor Haile Selassie First, within the Alexandrian SEE.Thus, the difficulty of language and problems of communication which existed for a long period of time and the problem of distance of place owing to the time taken by journey between Cairo and Ethiopia, where the Church was frequently without a Bishop for a period of two years and more, especially during persecutions, had been solved. On the other hand we can see the difficulty which Egyptian Fathers have had to pass through to keep alive the Ethiopian Church which was surrounded by Muslims throughout its history. 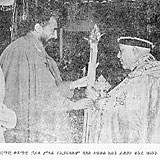 "...We have decided to stay....In England, and wait for the judgement of our Creator to resolve Ethiopia's crisis. Until the grace of God permits and bids Us farewell to come to Jerusalem, so that We may overcome the problems of worship that we have encountered, and so that Our growing children do not go astray from the foundation of our religion I have sent Abba Hanna to you so that he may return with one tabot, five monks, the things necessary for the services and a Bible....."
[H.I.M] 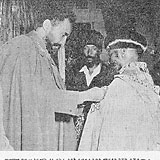 We learn from the Holy Scriptures that the first Ethiopian who confessed faith in Jesus Christ was baptised only a few months after the death and resurrection of Our Lord. From then on Christianity spread steadily among the Ethiopian people and became the religion of the Ethiopians in the Fourth Century. It is a matter of pride for Us, a special cause for thankfulness to Almighty God, when We recall that the Christian Faith was introduced to Our people by the Imperial Court and through the instrumentality of the then reigning Monarch

Our Lord Eyesus Kristos says: "What has a man profited if he shall gain the whole world and lose his own soul?" Why did the effort of those who tried to build the Tower of Babel come to nothing? Was it not because they tried to live apart from their Creator, and because, vaunting themselves in their wisdom, they tried to build a tower whose top was to reach unto heaven and thus make a name for themselves? It is Our conviction that all the activities of the children of men which are not guided by the Spirit and counsel of God will bear no lasting fruit, they will not be acceptable in the sight of the Lord and will therefore come to nought as the Tower of Babel came to nought.

Oh racists "prepare ye the way of the Lord, make his paths straight, let every valley be filled, and every mountain and hill be brought low; and the crooked be made smooth." (St. Luke 3: 4-5)

“...Bob was really a good brother, a child of God, regardless of how people looked at him. He had a desire to be baptised long ago, but there were people close to him who controlled him and who were aligned to a different aspect of Rastafari . But he came to Church regularly. I remember once while I was conducting the Mass, I looked at Bob and tears were streaming down his face ...When he toured Los Angeles and New York and England, he preached the Orthodox faith, and many members in those cities came to the Church because of Bob. Many people think he was baptised because he knew he was dying, but that is not so…he did it when there was no longer any pressure on him, and when he was baptised, he hugged his family and wept, they all wept together for about half an hour.”
(Abba Yesehaq Nov 25, 1984)